We are pleased to officially release Seafile Server Professional Edition 7.1. The Community Edition of Seafile 7.1 was released on 2020-03-26.

Seafile 7.1 brings to an end a major upgrade of its code-basis. The ambition was to create a rock-solid, high performance platform for Seafile’s development in the years to come. The first step of this undertaking was accomplished roughly 12 months ago with the release of Seafile 7.0. The user-part of Seafile’s frontend was recoded in React, a JavaScript library developed from dynamic websites. Seafile 7.1 completes the job begun. The system administration in Seahub is now also written in React. But the recoding of the frontend is only one part of the code-basis upgrade! Under the hood, Python 2, which reached end of life at the beginning of 2020, was completely replaced by Python 3 code. We think we delivered on our ambition.

Our developers haven’t busied themselves with recoding though. We have also added some new and interesting features to this release. We present the most important ones here; for a complete list, check the changelog.

You can now generate API tokens for a library and integrate Seafile with third party programs. In the old version, you need to create an access token using a user email and password. The access token can do anything the user can do. The new API token restricts the access to a single library, which is more secure and more convenient to manage.

You can find the API documents for using the library token here https://download.seafile.com/published/web-api/v2.1/library-api-tokens.md

The more intensive the collaboration with external partners gets, the less fitting exchanging data by sharing links becomes. As a guest, an external party has a user account and can use the web interface as well as the clients – within the limits of the restricted guest role. In Seafile 7.1, sharing with guests has become a lot smoother as a guest invitation and a library share can be made in one go. With the acceptance of the invitation, the guest is granted access to the shared library. In previous versions of Seafile, a library share could only be made after the acceptance of the invitation.

New features in Seafile 7.1 also make the handling of documents more straighforward, more comfortable, and more secure. Seahub’s PDF-preview now offers various zoom levels to be changed by the click of a zoom-in and a zoom-out button. Taking Markdown files into the analog world – on paper – is also much improved. When using the browser’s print function, the resulting document shows only the MD-file’s content with the proper formating. Finally, beginning with Seafile 7.1, the integration of Seafile and ONLYOFFICE supports JSON web tokens which prevent the substitution of important parameters in ONLYOFFICE Document Server.

While Seafile 7.1’s installation procedure has not changed compared to earlier versions, the upgrade from Seafile 7.0 is a bit more complicated than usual due to the migration to Python 3. The upgrade notes guide you through the process.

The Professional Edition is available for download in our Customer Center, the installation packages for Debian/Ubuntu and CentOS can be downloaded from our download site. Docker images for both Seafile editions will also be available soon.

Following the release of the beta version of the Community Server 6.3 on May 26, we are pleased to release the Seafile Professional Server 6.3 for testing today. The production version is slated for the end of July.

The redefinition of the role of groups in Seafile is the most notable change in version 6.3. Group-owned libraries and the nesting of groups are completely new features. The support of multiple storage backends and the persistence of public links are two more major improvements introduced in version 6.3. More details about these and the many other improvements are coming up in the rest of this announcement.

Through version 6.2, the ownership of libraries was limited to users. Reacting to feedback from user base, this changes in the current release! Beginning with version 6.3, ownership of a library can lie with a user or with a group. Additionally, groups can be assigned quotas and they can have sub-groups. With this change, we aim to facilitate file and storage management in larger organizations with frequent group entries and exits. Here is just one example of where we think group-owned libraries will be of help: If a user leaves a group, no more libraries must be transferred from this user to another.

Groups able to own libraries are called departments, their sub-groups sub-departments. All libraries created in a department by a department administrator belong to this department and can be accessed by all department members – either with read-only or read-write permission. Of course, commonly-owned libraries can be shared to other groups and users outside the department.

Departments can be created and managed via the admin panel (see figure). An unlimited number of admins and users can be named as members. In a future release, we will add the ability to transfer ownership from a user to a department.

With Seafile Professional 6.3, different local storage backends (e.g., local disk and Ceph storage) can be combined and used together for one Seafile server instance. To use this feature, all data need to be sent to the Seafile server which then determines where to store the data based on the individual configuration.

Besides increasing general storage flexibility, multiple storage backend support also opens up new application areas for Seafile. In one implementation scenario, which we deem attractive, fast disk storage is operated side-by-side with slow, high-density optical storage. When a new library is created, the user chooses whether to make the library hot access and to store the library in the disk array or on the optical storage for long-term archiving.

Did you know: A sharing link was rendered unusable when the file or its folder was moved or renamed? We did know and we did not like it! This is why Seafile Professional 6.3 does away with it!

Beginning with version 6.3, public links are persistent and immune to file transactions such as renaming or moving. Public links also stay intact when library ownership changes. Only deleting a library, this you can’t do without harming the public link.

Good news for all those that use Seahub without Collabora or OnlyOffice integration: Seafile’s built-in document file preview is a great deal faster now. Instead of rendering office documents in HTML, they are converted into PDF format and displayed as such. pdf.js, which Seafile uses for that purpose, has also been updated.

Seafile Professional Server 6.3 inherits all improvements and updates that the earlier released Seafile Community Server 6.3 features – for which a production version was made available since the beginning of the week. Below a summary of the three most important shared improvements.

It replaces the old non-WYSIWIG editor which – unfit for extensions – proved to have reached the end of its lifetime.

A new table is added by clicking on the table icon in the menu bar. Rows and columns can be added/removed and alignment changed quickly by means of context-sensitive menu buttons (see figure).

Images can be inserted by simply dragging&dropping the files form the file manager into the editor, through the clipboard or the image icon in the menu bar. Similarly, links to other files in the same library can also be easily added by drag and drop. Another boon of the new editor: It supports markdown shortcuts. For example, * + space at the beginning of a line inserts a list.

WYSIWYG is enabled in the Rich Text Editor. The lovers of MD code’s clarity can switch to the Plain Text Editor by clicking on the three dots button.

Django 1.8, which was used since Seafile version 5.1, was deprecated in April 2018. Both Seafile Server editions have now been updated to Django 1.11. The long-term support of Django 1.11 runs until mid-2020. As a consequence of the upgrade, the FastCGI mode is no longer supported. Seafile behind Nginx/Apache must be configured in WSGI mode as of now.

jQuery was also updated to version 3.3.1

Version 6.3 introduces a slight modification of Seahub’s navigation bar. In an attempt to make the positioning of the action buttons more consistent across pages, the buttons moved to the top bar (see figure).

In this release, we continue our effort to improve the user interface of Seafile web and offer features to make organizing files easy and intuitive.

There are three major new features:

1. The login page is redesigned, adding a background image. 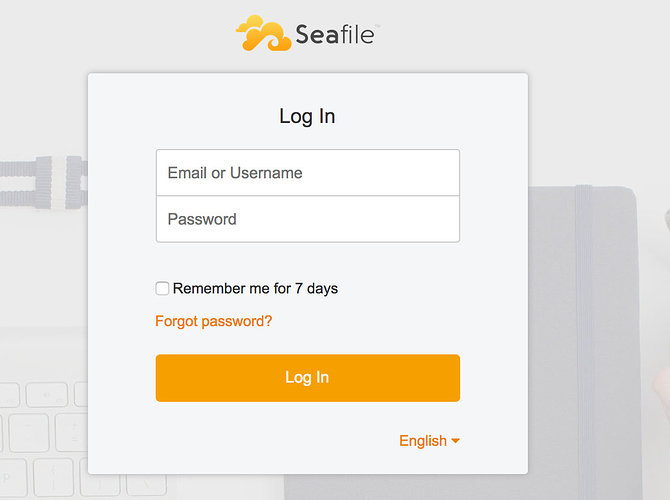 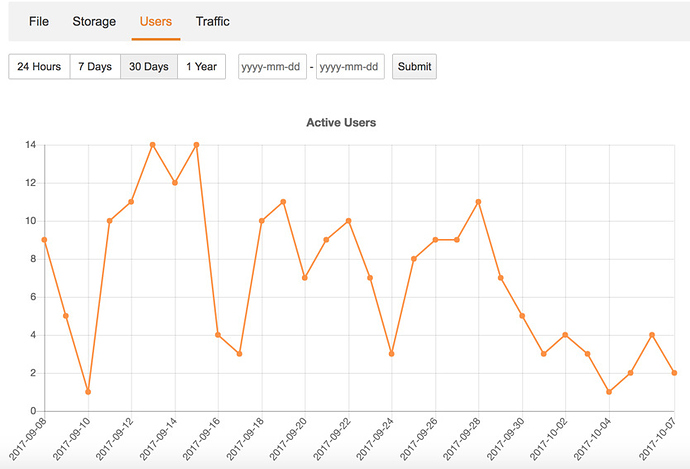 This feature is turned off by default, you need to turn on it by adding the following config to seafevents.conf.

3. “Admin” permmision when sharing a library to another user/group